Kudozza is an MS Teams bot that helps to give appreciation and makes appreciation visible to the team.
In this help page you’ll find how to install it and which features it has to offer.

If you want to read more about how Kudozza is helping you with your team culture, visit our WHY Kudozza webpage.

A kudos (also known as positive feedback) is best given in public so that many people can see it and have the opportunity to join in with an emoji reaction.

This is the reason why Kudozza only works in public team channels. You can not send your kudos directly to the Kudozza bot. Instead a team owner needs to install Kudozza within a team. Afterwards it is available in all public channels of that team.

There are two ways of giving a kudos:

The most comfortable way is to use the little icon below the messagebox to open a dialog which allows an easy entry of a kudos and gives the possibility to add a further reference link (e.g. if the reason of the kudos is within an external system).

The other way is a bit more simplistic but allows to add an image or video alongside the kudos message. Just author a plain message in your teams channel and add the @Kudozza bot like this:

You mention the @Kudozza bot and with the kudos command you tell him that you want every other mentioned user a kudos.
Part of the kudos can be categories which start with a hashtag.

And as the kudos command is the most often used keyword, you can just leave it out.

This method of giving kudos is best suited if you want to include an image or a video into your kudos as you can do it in the same message.

Kudos become really fun if other team members jump in and add a reaction.
This can be done either via the normal MS Teams reaction or via the “Add” button. The later has the advantage that it gives access to every available emoji. This adds a new level of expression and fun to every kudos.

Every organization with a paid plan of @Kudozza can upload their own icons to be used in kudos reactions. E.g. icons representing departments, teams or techncial frameworks. This increases the expressivness of reactions even further.

@Kudozza adds points to each action and generates reports over the aggregated points.

Each kudos and each reaction will give the sender, receiver and participant points.
The point schema in the standards setting looks like this:

@Kudozza can support organziation and team specific ratings. E.g. if you would like more emphasis on the giving of kudos you can configure a custom “rater” that simply gives more points for the author.

We currently lack an UI for this featur. If you would like to use it, drop us a mail (contact info is below).

Points make only sense if there is some sort of report.
@Kudozza provides them per team within a team specific tab.

There are user statistics where you find all the points the user have earned in the last 75 days.
Although the points are counted globally, a user in only listed in the team statistics if he has earned points within the 75 day period in the corresponding team.

Within the statistic there is a trend indicator for each user.
It shows whether the user has earned or lost points in the last week.

Remember the 75 days the statistics are calculated over? This 75 day window is sliding.
So each day the users are loosing points from 76 days ago and gain points for their new actions.

In addition to the user ranking there is also an overview of the recent kudos.
It includes the overall distribution of kudos and gives insights into the best perfomring/most reacted to kudos.

Sometimes some incentive is needed for users to start with the habit of giving kudos. You can use the ranking and the best performing kudos for some competition.

Some users dislike the idea of being included in rankings. In the personal settings tab of @Kudozza an opt-out flag is offered which will remove the user from every statistic and report generated by @Kudozza.

Users can use #hashtags in their kudos to give a kudos more context. You can setup some categories which are then taken as #hashtag suggestions whenever the user hits # in the Kudozza Dialog. Your company values might be a very good fit for predefined categories. Category Images

For a quick start we have added some example values, you might want to reconfigure these (in the left pane choose: Kudozza -> Administration -> Categories). 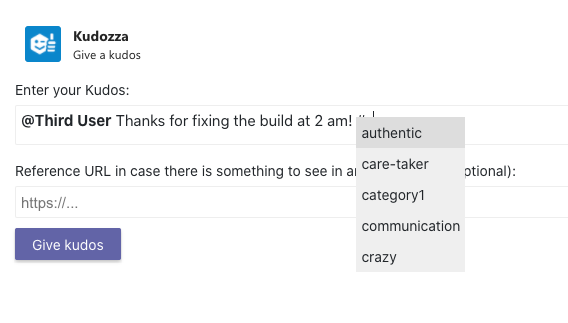 This helps to make kudos visually more appealing and to emphasize important categories.

For the time being, categories have no impact on statistics or rating.

Kudos can be given in each channel of a team, once the @Kudozza Bot is installed within the team. To not loose track of all the kudos given it is possible to create a channel named Kudos Arena (or Kudozza Arena) within the team and @Kudozza will send a note for every kudos that is given in that team to that one channel.

It would be a real pleasure to get into contact with you. No matter if you have a question, a feature request or a problem, we would love to work with you on it. There is already some information on our website, but please don’t hesitate to get into direct contact with us via Twitter or contact form. Alternatively you can also send a direct mail to info@kudozza.com.